April 2020, course «Thematic Project» at the Centre of Geographic Sciences

In the last semester of the Geographic Sciences program (Cartography concentration) at the Centre of Geographic Sciences, students work on a individual thematic project. I worked on a foldable map for the Digby region showing hiking trails, lighthouses and other open spaces.

Digby is very important for my dream to come to Canada and I wanted to give something back to the region. That's why I approached Jonathan Riley from the Municipality of the District of Digby and Greg Turner from the Digby Area Tourism Association in Autumn 2019 with the idea of a map for the region. They both liked the idea and I started the project in January 2020.

The map is used in tourism and recreation and focuses on the hiking trails in the Digby region. The map also shows the locations of the lighthouses and other open spaces such as beaches and parks.

That said, the map provides an overview of various recreational activities in the region and acts as a tourist map at the same time. Although primarily intended for tourists, the map does also want to address local residents and other Nova Scotians.

Presented map uses a simple design. Some colours such as for water features, parks and forested areas are related with the colours of a Swisstopo map. In addition, a burgundy-like colour and brown were used. They harmonize well with the other colours. For labelling, the fonts PT Sans, PT Sans Narrow and Lora are used. Lora was chosen for its subtle cursiveness of its italic font style. However, PT Sans’ and Lora’s digit 1 has a serif which did not look well in map shields. Therefore, the font Roboto is (solely) used for numbers.

There are three main features, hiking trails, lighthouses and other tourist features such as parks, whale watching, canoe launching, beaches, washrooms and other facilities. A brown colour (earth) is used for the hiking trail labels and a burgundy-like colour for the lighthouse labels. Lighthouse labels are not filled in order to not appear more prominent than hiking trails. All other features use classic icons. Most of those icons should be familiar to most map readers. However, this map is using a gender neutral washroom icon at the request of the client. After some research it was obvious that only a toilet or the lettering WC is commonly accepted to use by the community. However, using a toilet seat makes the icon too prominent whereas using the lettering WC is not well-known in North America. Therefore, a combination is used.

The map is inclined by 8 degrees so that Brier Island and Annapolis Royal fit on the map sheet. Although Annapolis Royal is located in another county, it is important for a map reader’s orientation because of its highway exit 22 which connects Digby with the south shore of Nova Scotia and the national park.

There are four inset maps and one access map. All inset maps are inclined by 8 degrees as well to be consistent and also have the inset boxes on the main map parallel to the margin. Due to their larger scale, the inset maps show additional features such as forested areas and larger buildings. There is one smaller scale access map for New France to overcome the fact that the dry weather road connecting New France with the rest of the map is just outside of the paper’s margin.

The folding concept is similar to the 2015 Highway Map of PEI. The inset maps were placed in a way so that the user can access them quickly with only two unfolding steps. There is also an overview map of the Canadian Maritimes which provides essential information on how to come to Digby.

Thanks to Jonathan Riley, Greg Turner, Greg Mosher, Heinz-Günther Sussdorf, Martha Bostwick, the Digby Area Tourism Association and the Municipality of the District of Digby for their support and assistance. 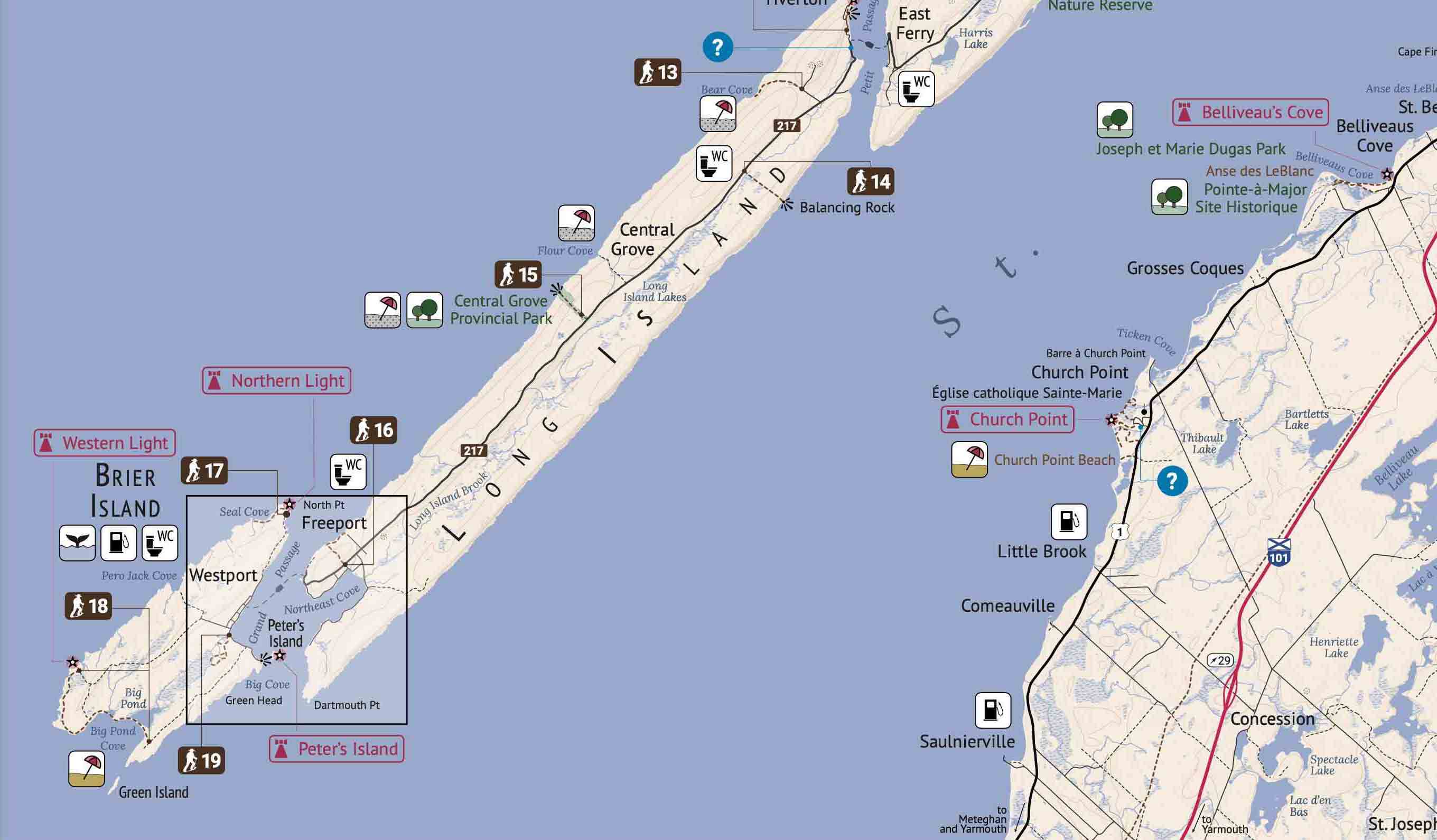 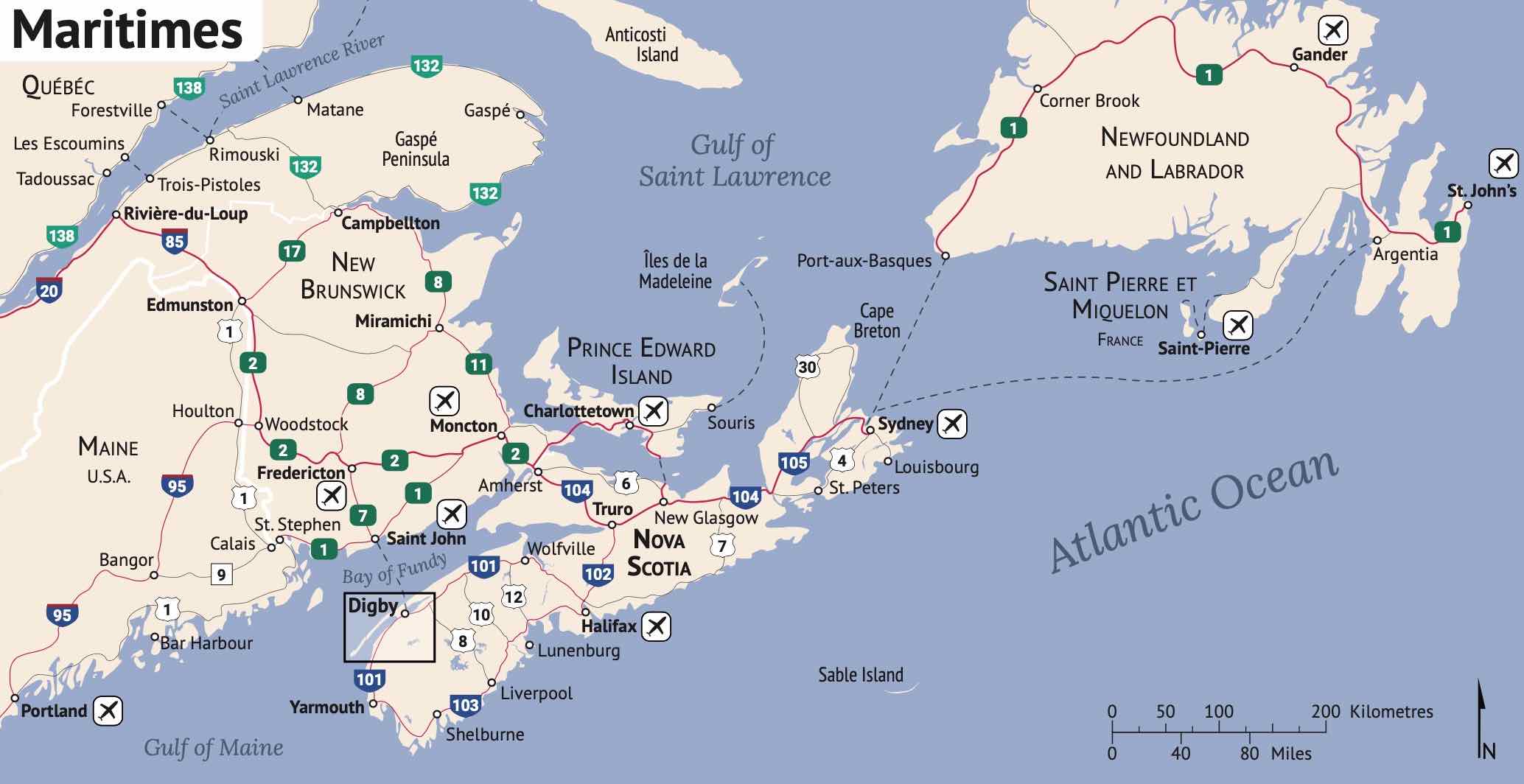